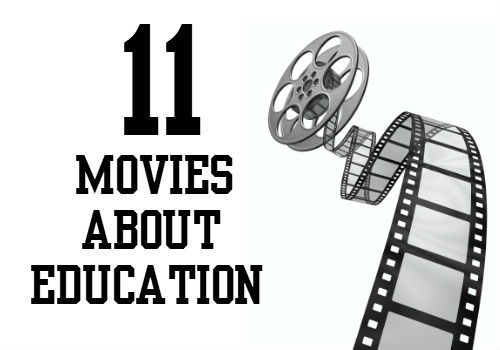 Be it providing education or receiving it, the task isn’t easy at it seems. It requires a lot of effort and energy. There may be various elements to tackle in between to earn real benefits out of education. Bullying, racism, inequality etc. are some social issues that the providers and the students have to face in common.

There are some other issues that are solely confined to teachers or students. Hence, it is very difficult to understand for people outside the circle. But many movies have brilliantly portrayed most of the issues related to education so that others out of the education system can understand them better.

Here are 11 movies that narrate some of the challenges faced by teachers and students in the education system. These convey the importance of education:

Released in 1967, this movie highlighted racial and social issues. ‘To Sir, with Love’ narrates the story of Mark Thackarey, a former engineer, who begins his career in teaching at an area with low standard of living in London. Soon, Mr. Thackarey realizes that rather than arithmetic or any other subjects, how to survive is what he has to teach his students and how Mr. Thackarey achieves that forms the rest of the story. Actor Sidney Poitier portrayed the role of Mark Thackarey in this feel good movie.

‘Educating Rita’ is all about self-discovery and the power to choose, that comes through education. The movie narrates how the life of a young wife Rita (played by actress Julie Walters) transforms when she comes in contact with Frank Bryant, her assigned Open University professor after deciding to complete her education. Mr. Bryant happens to inspires her and teaches her to value her own thoughts.

A bit different from the usual teacher-student movie, ‘The Breakfast Club’ tells the story of five students, each belonging to a different high school group, who happen to come together during a Saturday detention and connect to each other. The movie successfully portrays the interaction between students in an education system.

This 1988 movie revolves around a high school maths teacher, Jaime Escalante, who leaves his highly-paid job to take up teaching. ‘Stand and Deliver’ narrates how Mr. Escalante motivates his undisciplined and rebellious bunch of students to excel in academics while overcoming various hurdles. The movie is based on a true story and the character Jaime Escalante is for real. In the movie, actor Edward James Olmos played the role of the teacher, Jaime Escalante.

This classic film tells the story of a teacher who motivates his students the break out of their normal lives to seize the day and to be extra ordinary. Late actor Robin Williams played the role of John Keating, the free-spirited, understanding and inspiring teacher, every student wishes to have. The movie ‘Dead Poets Society’ and the character John Keating has been inspiring students for many years.

Director Stephen Herek brilliantly portrays the harsh realities related to teaching in his movie, ‘Mr. Holland’s Opus’. The movie is about Glenn Holland, a music composer who is forced to take up the job of a high school music teacher to pay his bills, who later discovers the impact he made on his students. Actor Richard Dreyfuss portrayed the role of Mr. Holland in the movie packed with touching scenes that can leave you with a lump in your throat.

The fictional documentary, ‘Chalk,’ narrates the challenges and problems that four teachers endure over the course of an academic year. Some moments of the documentary make you laugh, while others make you think as it honestly depicts the real hardships one has to face in one of the most respected professions-teaching.

More than a student-teacher story, ‘Half Nelson’ explores race and class issues and friendship. In the movie, Ryan Gosling plays Dan Dunne, a high school teacher, with a unique teaching style, who is otherwise, a drug-addict. Mr. Dunne is forced to be friends with one of his students, when she finds out his secret.

This movie proves that education isn’t something that is merely confined to the four walls of a classroom, but beyond that. In the movie, actress Hillary Swank plays Erin Gruwell, a teacher who motivates her rebellious and underprivileged students to improve in terms of academics and behaviour by asking them to maintain journals about their lives.

This Indian movie, which comes with a tagline, “Every child is special” gives a new definition to education. Tare Zameen Par narrates the story of Ishaan Awasti, who is good at art but fares poorly when it comes to academics. Ishaan’s art teacher Ram Shankar Nikumbh, suspects that Ishaan is suffering from dyslexia and helps Ishaan overcome his disability. Actor Amir Khan plays Mr. Nikumbh while Darsheel Safary plays Ishaan Awasti in the movie. .

This movie about an illiterate and obese girl explains the importance of education. Actress Gabourey Sidibe plays the role of 16-year-old Claireece Precious Jones, who is physically and mentally abused by her mother and is sexually abused by her father. Precious Jones later enrolls in an alternative school and certain incidents inspire her to have a new outlook of life.

All these amazing movies help you to understand a lot about education. They might help you to provide better education to students. And for that to happen in an easier way, you can embrace technolgy. There are solutions such as RFID Student Tracking System, GPS Vehicle Tracking System, Parent portal and smart cards for schools that can be quite effective.