A union territory is a form of administrative division, where the ruling power directly vests upon the hands of the Union government (Central government), and hence termed as “Union Territory”.

As we all know, India, the 7th largest country in the world, is distinct from the rest of Asia, with mountains and seas. The country has got a unique geographical entity of its own.

It is a democratic, sovereign, socialist and secular republic with a Parliamentary system of Government.

It is one of the ancient civilizations with a rich cultural heritage and scenic beauty.

What are the Union Territories (UT) of India?

These Union Territories of India have special rights and status due to their process of formation and development.

For the ease of governance, each union territory is divided and sub-divided into smaller administrative blocks, where the villages form the smallest blocks.

How many Union Territories are there in India?

There are 8 union territories in India, each of them with their unique identities

All these union territories are developing alarmingly in India for different sectors such as tourism, industry, infrastructure, etc.

Dadra and Nager Haveli and Daman and Diu are well known for its beautiful beaches, Portuguese forts and churches and on the other hand, Delhi is famous for the heritage sites and old monuments, and Andaman and Nicobar Islands, Lakshadweep for pristine beaches

In this blog, we will discuss the Union Territories of India (largest and smallest), their names, and their uniqueness. 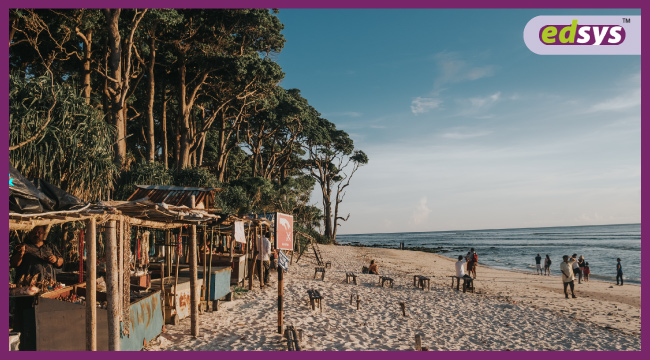 Andaman and Nicobar Island is a beautiful piece of land with shimmering beaches and lagoons of turquoise blue waters blended with a bit of history.  This place is tucked around 1,400km away from the east coast of India.

Andaman and Nicobar islands comprise of 572 islands, in which only 37 islands are inhabited and a few are open to the tourists.

This was the first union territory of India that was established in the year 1956.

The British used these islands to hold prisoners, mainly Indian freedom fighters. The local tribes of Jarwa and Great Andamanese maintain an aloof existence to this day.

The scenic beach of Havelock and Neil Islands and lagoons with crystal clear water invites tourists to have a peaceful, laid-back holiday. Scuba diving is the favorite sport of holidaymakers at Andaman 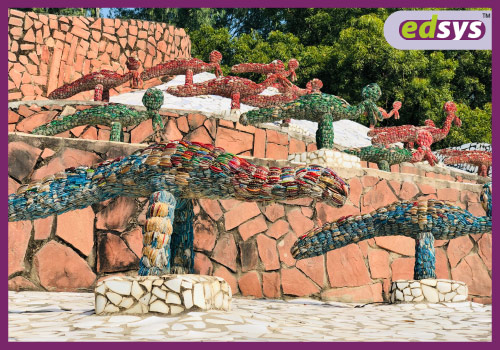 Chandigarh, though a Union territory, is the capital of both Punjab and Haryana.

It has the status of a city and union territory at the same time. It was constituted on November 1, 1966.

The state of Haryana lies to the east and the state of Punjab on all the other three sides. The city was designed by a French architect, Le Corbusier. The Secretariat, Legislative Assembly, and Capitol complex buildings were built by him.

Chandigarh is known as the green city of India. The famous rock garden featuring sculptures made of stone and recycled material by Nek Chand, the Sukhna Lake, the rose garden, and the terraced garden are major attractions of the city.

From 26th January 2020, Dadra and Nager Haveli and Daman and Diu are to be combined into a single union territory with reference to the legislation passed by the Government of India.

This merging came into force in order to reduce administrative costs and duplication of services. Daman is considered to be the new capital of this newly found union territory. 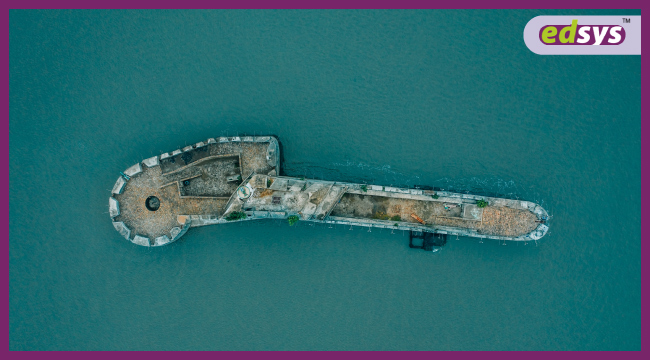 Dadra and Nagar Haveli, located on the west coast of India.

The regions were part of Portuguese India. They were merged with India as a union territory in 1961.  Dadra, the smaller region, is in Gujarat. Nagar Haveli lies in between Maharashtra and Gujarat.

The Portuguese heritage, the greenery, and the scenic beauty of the land welcome tourists from around the world. The beautiful lake garden Vanganga is located at the entrance to the city.

Daman and Diu, located on the west coast of India.

They were part of Portuguese India even after independence. Daman and Diu became part of the Union Territory of Goa in 1961.

Daman and Diu have a mixed culture featuring Indian and Portuguese. The territory with its beaches, scenic beauty, forts, and Portuguese churches is a popular tourist destination. 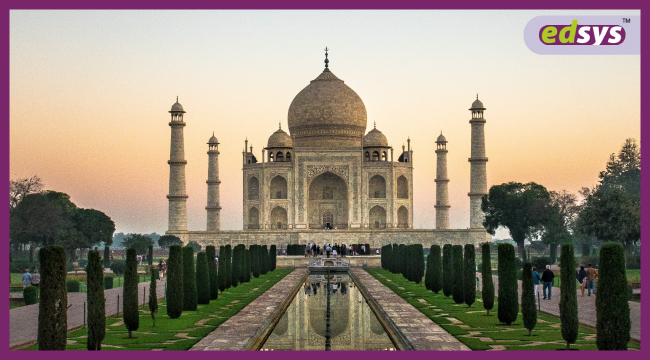 Delhi is a union territory and also the national capital of India. Delhi is governed by its own legislature as like in other states of India.

It was awarded the status of union territory in 1956. The territory is bordered by Uttar Pradesh on the east and by Haryana on all other sides. 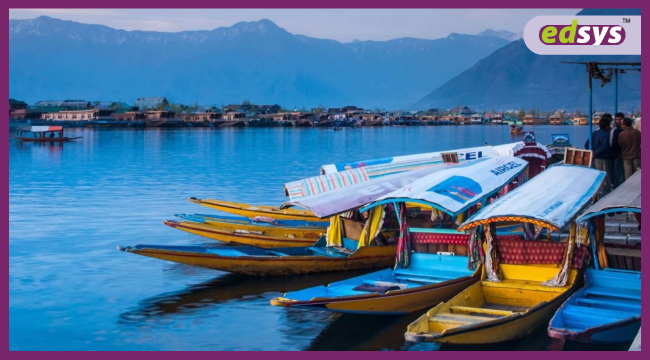 The special status provided to the Jammu and Kashmir on the basis of Article 370 of the Constitution of India was withdrawn.

The state’s terrain is mostly mountainous. Thorn scrub and grass form the vegetation.

Agriculture is done on terraced slopes. Rice is the chief crop. Corn, millet, pulses, barley, wheat, cotton, and tobacco are also cultivated in accordance with the seasons. The region is the sole producer of saffron in India.

Jammu & Kashmir, known as the Paradise on earth, is famous for the snow-capped mountains and glaciers.

The region abounds in nature’s splendor with lakes, meadows, valleys, and evergreen forests. The temples of Amarnath and Vaishno Devi are pilgrim centers. Gulmarg, Shalimar Bagh, Dal Lake, Khardung La pass are the most beautiful places to visit. 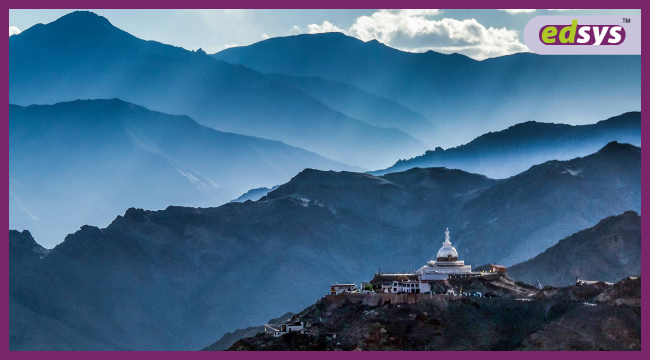 Ladakh was classified as a union territory in August 2019 administered by India. Prior to this, Ladakh was a part of the state of Jammu & Kashmir.

The region lies in the northern part of India. Ladakh consists of two districts,  Leh and Kargil.

Tourism forms a major part of the economy. The Pangong Lake, Magnetic Hill, Zanskar valley, monasteries and Leh Palace are sights to be seen in Ladakh.  It is a land of high altitude mountain passes. 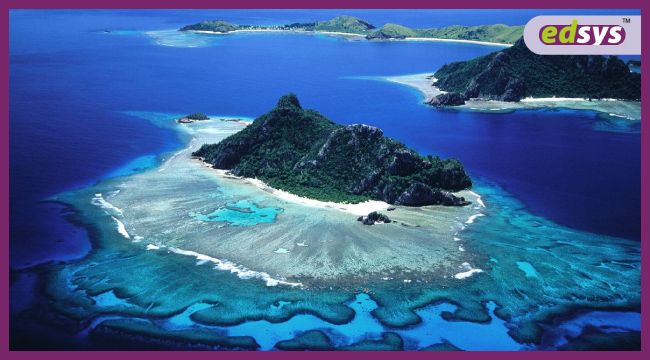 Lakshadweep is the smallest of all union territories of india in terms of size and population.

The islands were a part of Madras until it was separated in 1956 and made a union territory.

It was called Laccadive, Minicoy and Aminidvi prior to being renamed Lakshadweep in 1973. The island lies in the sea Laccadive southwest of the Indian mainland.

Coconut palms are the mainstay of the island. Fishing forms a major segment of the economy. Tourism is promoted though with caution to prevent environmental damage.

The archipelago of 36 islands and coral reefs are mostly uninhabited. The largest city is Andrott. The islands of Minicoy, Agatti and Bangaram are famous for their coral reefs, beaches and pristine blue waters. 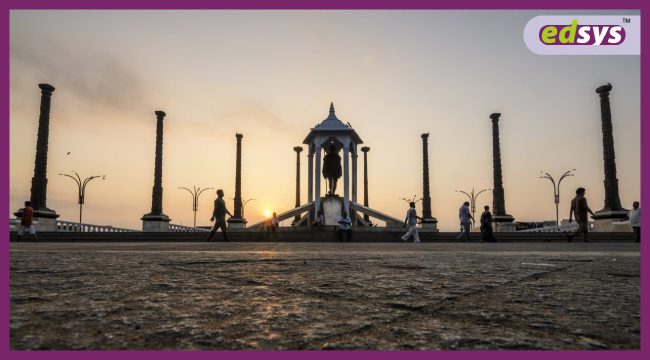 Puducherry is located on the southeast coastline of India in the state of Tamil Nadu. Pondicherry was formed out of the former French colonies of Mahe, Pondicherry, Karaikal, and Yanam in the year 1954. These places are now districts under Puducherry.

Puducherry shares most of its culture and language with Tamil Nadu. Farming of rice, pulses, sugarcane, coconuts, and cotton is done. Tourism promotes the town’s quaint French legacy.

Puducherry is often referred to as the Riviera of the East due to the French influence. The Aurobindo Ashram, churches, beaches, and seaside promenades promise serenity and tranquility to all travelers.

Which is the largest Union Territory of India?

Andaman and Nicobar Island is a beautiful piece of the island with shimmering beaches and lagoons of turquoise blue waters blended with a bit of history.  This place is tucked around 1,400km away from the east coast of India.

Andaman and Nicobar Islands comprise of 572 islands, in which only 37 islands are inhabited and a few are open to the tourists.

Which is the smallest Union Territory of India?

Goa is the smallest union territory of India which is situated on the west coast of the Arabian Sea. This place is the main spot of tourist attraction with beautiful beaches, churches etc. Other appealing features of Goa are its flora, fauna, world heritage- listed architectures etc.

29 States and Capitals Of India

During the time of Independence, union territories were not part of India and were too small to be made as a state.   And it was decided by the States Reorganization Commission in 1956, to form these under a special category named as “Union Territory”.

The union territory is directly governed by the central government. Union territories have no representation in the Rajya Sabha except Delhi and Puducherry

The 9 union territories are Andaman and Nicobar Islands, Chandigarh, Dadra and Nagar Haveli, Daman and Diu, Lakshadweep, National Capital Territory of Delhi, Puducherry, Ladakh and Jammu, and Kashmir. But in 2020, there are only 8 union territories in India.

country cannot be controlled under a single system. So it is divided into states and union territories for administrative purposes. It is also for the reason of preserving cultural identities, traditions, and heritages, as each state has its own souvenir.