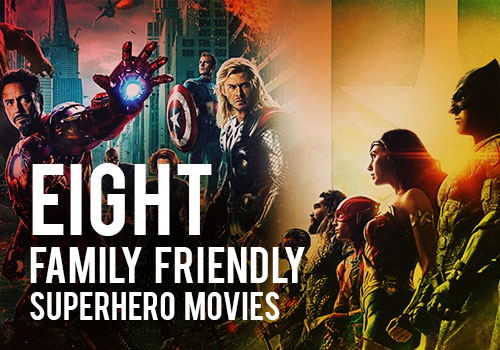 The best way to spend family time is to catch up of superhero movies.

They are fun, interesting and have superb time pass qualities.

Ask any adult and they will jump with joy at the mention of their favorite superhero.

Such is the charm of superhero movies.

So if you have not been to a movie-watching binge with your family then this is the perfect time to do so.

Listed below are some interesting superhero movies that you can watch with your kids anytime.

From early childhood he displayed numerous superhuman abilities. In the long run, he decides to use his powers for the benefit of humanity under the identity of “Superman”.

Over the years multiple Superman movies have been released. Each one of them has become equally popular and has grossed millions of dollars in the box.

Batman is another fictional superhero created for DC Comics by artist Bob Kane and writer Bill Finger. Often referred to as the “Caped Crusader” Batman unlike other super heroes has no special super power.

Rather he uses his physical ability, skill, martial arts expertise, knowledge of science and technology and his vast wealth to fight the villains of the day.

A large number of villains make up Batman’s rogues gallery but his archenemy remains the Joker. Opt for the dark knight trilogy if you are keen on showing your kids how cool is Batman is.

Peter Parker aka Spiderman is an orphan who is raised in New York by his Aunt May and Uncle Ben.

In the first movie we find him bitten by a radioactive spider that imparts him the qualities of a spider – i.e. he is able to cling to surfaces, shoot spider webs from his wrist and prevent villains from committing any crime by using his spider web.

Another creation from the house of Marvel, Thor’s character is based on the Norse deity of the same name and is the Asgardian god of thunder.

His enchanted hammer, Mjolnir has the ability to fly and manipulate weather so that he can defeat his enemies.

If you are on the lookout for a superhero movie where the protagonist is nothing less than God, opt for the Thor series.

Captain America has no dark side. Neither is he a party animal nor a ladies man. He is a wholesome, compassionate and brave person who is prepared to save America from the evil doers any given day.

This superhero adventure is full of explosive action sequences, fistfights and gunfights.

In short, it has all the elements that your kids will look for in a superhero movie.

As the world’s first and foremost female superhero, Wonder Woman is the epitome of grace, determination and strength.

She is one of the founding members of the Justice League and a representative of the Amazon people.

Her humanitarian character sets her apart from the rest of the heroes out there. She is a born warrior.

An animated superhero from the house of Pixar! The Incredibles has won several accolades and awards for portraying mature themes about families that can be easily enjoyed by adults and kids both.

In spite of being a PG rated movie, the story deals with weapons, widespread destructions, explosions and deaths. If your kids love animation and superheroes, than this movie is the perfect mix of both.

Take a tub of hot popcorn, colas by the side while the entire family sits down to enjoy a wholesome movie together.

When it comes to superheroes Marvel Comics tops the list of creating some unique and out of the box stuff.  X-Men is one such creation.

Made out of mutants – a subspecies of humans they have superhuman powers due to the “X” gene present in them. In the anti-mutant bigotry they fight for peace and equality between humans and mutants..

What makes Stan Lee’s Mighty 7 so interesting that the animated version features Stan Lee in the movie?

Although there is death and violence prevalent in the movie but blood and gore is not shown.

The movie deals with seven heroes who start off as enemies of each other. But as the movie progresses they start developing mutual respect and admiration.

As such your kids are sure to learn the values of respect, understanding and appreciating differences that exist in each individual.

The movie has a lot of appeal for grownups too.

Each one of the above-mentioned movies has become popular in their own right and has huge fan following across the globe.

If your kids have read the comics then show them the movies.

They are equally interesting and captivating.

Which are your favorite movies among the lot? Don’t forget to mention in the comments.