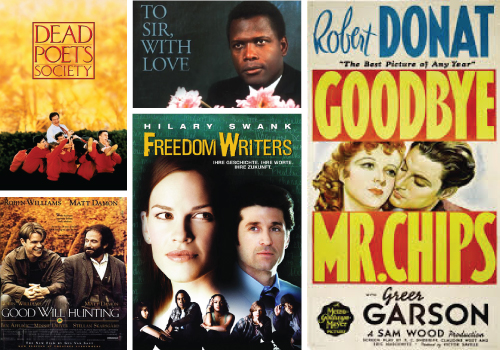 If we rewind yourselves to our school days, most of us had an inspiring teacher, right? Such teachers will definitely help students reach new heights by making a difference in their lives, their attitude as well as behavior.

But where do these teachers get inspired from? Certain movies about teachers and students can really help them gain great inspiration.

Must Read: 5 Inspirational Movies That Every Student Must Watch

Here is a list of top 9  best inspirational movies  which every teacher should watch at least once.

To Sir, with Love, this British drama film deals with social and racial issues in a school in the inner-city. The main character Mark Thackeray, acted by Sidney Poitier is an out-of-work engineer who later turns to teaching in a London school. Mr. Thackeray starts working in a high school where discipline has completely broken down. But he manages to earn the respect and admiration of students with his ground-breaking teaching methods. The film is noted by the actor’s powerful performance

The movie was a screen adaptation of E.R. Braithwaite’s novel of the same name. Hope you’ve read it!

Goodbye, Mr. Chips, this is a sentimental story of a kind hearted English school teacher Charles Chipping at an English boy’s school in Brookfield. His lack of authority in the classroom, results in a disordered outburst from the students and a severe warning from his headmaster. After that he becomes a strict disciplinarian, who was disliked by boys as well as fellow instructors. His marriage with Kathy makes his life change. With gentle guidance from his wife, Chips gains the respect and affection of students and faculty. Even after his wife’s death in child birth, Chips maintains his better personality, resulting in advance in career.

The film was nominated for seven Academy Awards and Robert Donat, who acted as Mr. Chipping has the Best Actor award.

Dead Poets Society, the movie is the story about an unconventional English teacher John Keating, whose poetry teaching inspires his students. His unorthodox teaching surprises the students.  On the first class, he has the boys tear up the syllabus and has followed his unique teaching methods. The teacher has even asked the students to stand on their desks to teach them how they must look at life in a different way. Keating’s unique methods of teaching have also attracted the attention of their strict headmaster Gale Nolan.

It is Robin Williams who stars as the rebellious teacher. The movie has won Academy Awards for Best Screen Writing and other nominations include Best Picture, Robin Williams nominated for Best Actor, Peter Weir for Best Director.

Freedom Writers, the movie is quite positive, with interesting characters, and moral messages. This is a true story about Erin Gruwell, a young white teacher, who is idealistic but strong-willed. The teacher faces trouble with her mixed freshman class of Hispanics, blacks, Asians, and one white guy. While the white guy just wants to leave, students from other races are not at all interested discussing Homer, or even proper grammar. And one day Ms. Gruwell breaks through with a comment about racism, from when she scores a place in their minds.

By earning her student’s trust, she makes them record their diaries. In their diaries, they talked about their tough experiences of being abused, and seeing their friend’s death.

Good Will Hunting, this American drama film is about an unrecognized genius. 20-year-old South Boston laborer Will Hunting is a self taught intellect. This high school dropout works as a gatekeeper at the Massachusetts Institute of Technology and spends time with his friends. Gerald Lambeau, the math professor, discovers the talent in Will and forces him into therapy and math lessons. However, Will is not comfortable with the new life and always wanted to stick back to his old familiar life.

The movie was nominated for 9 Academy Awards, and has won two awards – Best Original Screenplay for Affleck and Damon and Best Supporting Actor for Williams.

The Class, a different kind of a teacher movie, this documentary story takes place inside the school. Viewers will never see the students anywhere else, at home or on the street. The story is the struggle between Marin, a school teacher who wants to do something good and students who disagree those attempts.

The movie, based on the 2006 novel by François Bégaudeau has won Oscar for the Best Foreign Language Film and Golden Palm Award at 2008 Cannes Film Festival.

Finding Forrester, written by Mike Rich, here learning does not take place primarily in the classroom. Also the teacher is a writer, not a trained educator. The story is about a young African-American Jamal, who gets scholarship to a prestigious prep school. Though intelligent, Jamal hides his talents as he is interested in basketball. He meets up Mr. Forrester, at his apartment in a night and there develops a friendship that benefits both of them. It is similar to what a teacher learns from his student.

Stand and Deliver, the story is about a math teacher Escalante, who has left a higher-paying business job and has returned to the teaching profession to prove something. He takes the challenge of guiding a class of losers and potential dropouts. In the course of one school year, this teacher gradually transforms them.

Lean On Me, one among the best inspirational movies, the movies is the about the story of Joe Louis Clark, an inner city high school principal New Jersey. The challenge he faced was that this school is at risk of being taken over by the New Jersey state government. The students cannot even pass the Minimum Basic Skills Test.  Clark makes changes in the school that was once known for drugs and crime. He was also able to positively influence the students.