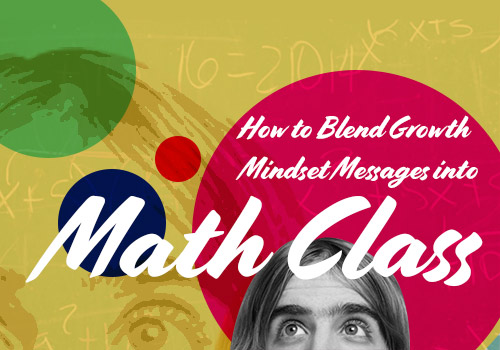 Math is one of the most troublesome subjects for most of the students. However, the minority who likes math finds it really easy and interesting than any other subject. It is the love for the subject that made them win over it. The way teachers handle the subject is also important when it comes to the end result. There should be some wise strategies applied when handling such subjects. And it is very important to encourage or incorporate growth mindset messages into math class than treating it with a fixed mindset strategy. In fact, changing a student’s math mindset itself can help them to boost their subject performance.
Here are a few among the many important ways teachers can nurture a growth mindset among students while teaching mathematics:

1. Problems with errors: Engaging them with a set of worked out problems that have output errors or step wise errors are a good strategy. This gives them a chance to think out of the box to find out what went wrong and they would come up with better solutions. Giving them such chances to think critically would foster a growth mindset when approaching the subject.

2. Solve problems independently: In most of the math classes, teachers are demonstrating the way of solving a problem at first and ask them to solve a similar problem with different variables. This gives them minimal chances for thinking more about the problem solving as they just replicate what you demonstrated at first. Change your approach to the subject and give them chances to solve the problems independently and then correct their mistakes if any.

3. Re-frame mode of assessment: Changing the mode of assessment can help lot in boosting the growth mindset in math class. Assessment should not always be targeting on the final grades they achieve. The students should be credited if they make an attempt to revisit the problems they went wrong and reworks it to reach the solution. Growth over a period of time is important when it comes to subjects such as math rather than getting a good grade once.

4. Productive feedback: Human brains are programmed to pay more attention to the negative signals. So it is important to give them feedback in the most positive way to help the students to get a growth mindset. A productive feedback with constructive criticism can play the trick rather than pointing out their mistakes in an unfriendly way that causes them to fear the subject.

5. Prepare every student: When we talk about growth mindset, the main target is on students who are performing weak. In fact, equal importance should be given on students who excel now also. This is important to help them perform better every time than living with a mindset that they are masters of the subject. Give them chances to struggle with the subject with some difficult problems and let them face failures once in a while. This works better than facing a failure all of a sudden in a higher class that kills their confidence.

6. Value the learning process: Teachers should convey the message very clearly to the students that grades and ranks are not just the mere motive behind learning. Or else the self perceptions of aptitude injects them a fixed mindset. So it is important to make them understand that the learning process should be valued more than the success achieved temporarily. Prioritizing the learning process over grades boosts their growth mindset.

7. Explore with open problems: Teachers should make an extra effort to give them a chance to explore with open problems. This helps students to understand concepts better and they relate similar problems very fast. In this approach, teacher can first give a simple problem and expand it step by step once they find solutions for each segment. This method helps them to explore the subject with their personal steps rather than looking blindly at an algorithm.

8. Thinking mathematically: Nurture a mindset in them to think mathematically when approaching a problem. You should welcome their questions even when it makes sense or not. Let them visualize the problem or generalize, justify and prove that their approach is right. Develop a curious mindset in them right from their junior classes and help them to be resourceful enough to approach even the weird problems without thinking twice.

10. Ability grouping: The ability grouping approach by teachers are based on their thoughts about what a student can achieve or not. The idea of weak student groups and intelligent student groups in fact set a fixed mindset in students about their position in the group. The works for the weak groups are mostly easy and demands only less application of brain. This approach actually snatches their chance to perform better and think better with an extra effort. Ability grouping is never a good idea to promote a growth mindset.

11. Stress free classroom: A classroom which is low in stress itself gives them a peace of mind in approaching the subject. Give them ample time to solve a problem in the first time rather than forcing them to solve the problem in the fixed time frame which gives them an unwanted stress. A fixed time frame may block their thinking mindset and they might feel stressed and loss in problems. It is important to talk with them and find out a success plan in their failures rather than pushing them to perform better and stressing them.

12. No fear about mistakes: When approaching a subject like math, it is important to set a mindset that has no fear for mistakes. Or else they would step back without giving it try thinking about the failure. Making them understand that mistakes are stepping stones to success helps them to approach the problems in a confident manner.

13. Set achievable micro-goals: It is good to help them target small achievable goals rather than asking them to push hard for unrealistic targets. This in fact helps them to make an incremental and consistent progress in their approach to the subject. This is actually a psychological approach because repeated small wins continuously gives them a boost in the confidence and they slowly develops a growth mindset.

14. Praise student’s efforts: It is not advisable to praise the intelligence part of a student in their success. Teachers should actually praise their effort on the way to their success. If intelligence is praised over effort, students would lack self motivation in case of a failure in future and they easily get depressed causing repeated failures. But if their effort is praised instead, they would continue to make efforts despite the success or failure.

15. Change view about math brain: It is a common thinking that students who perform better in math are born with a math brain. In fact, it is just an illusion and there is no such brain according to research. Developing a growth mindset during the smaller classes is the key to approach the subject easily with a ‘math brain’. Hard work and determination will always be paid and there is nothing that blocks you to perform better.

16. Promote cooperative learning: According to many researches, studying in groups promotes a growth mindset than individualistic or competitive approach. So promote peer groups in class which gives them a chance to teach and learn from their peers and enjoy the process of learning. When a student performs in groups, it gives them an extra responsibility of performing for the group’s success and this in fact enhances a growth mindset in them.

17. Build up confidence: Making an effort to build up their confidence is just as important as teaching them the different strategies in the subject. A boosted confidence would always be an effective tool for a student rather than knowing some math techniques. This promotes a growth mindset in them and helps them to think on their own in solving the problems even if they are new to the technique.
A fixed mindset when learning math in fact degrades a student’s capability to think out of the box. When teacher gives focus and importance in integrating growth mindset messages while learning math, it actually opens them a world of possibilities and gives a chance to discover and explore their hidden talents. A growth mindset approach can really make a difference in the way they excel in their learning. This teaching technique helps them to think out of the box on many instances and this improves their critical thinking and logical reasoning capability.