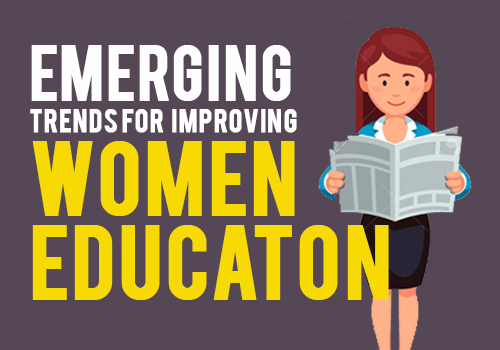 Care for the girl child!

This is the slogan of almost all the countries across the globe which are aiming for development.

Given the fact that women’s education is a necessity for every society, there a number of complex debates and issues surrounding this topic.

In the past, boys were always the recipients of better treatment coming from the patriarchal society.

But this trend is changing with more and more girls attending schools and colleges in pursuit of primary, secondary, tertiary and health education.

Below are some of the emerging trends of educating a girl child.

If women are not educated, they will fail to understand their rights.

They will also lead to the emergence of societies which have widening gender gaps between the progress made by boys and girls. Such societies are detrimental to the progress of a nation.

Nowadays, the trend of gender responsive education system is picking up, favoring the uniformity in educational access for both urban and rural areas.

This trend is expected to continue for long, banishing the ancient practice when education was limited to a particular gender.

One positive thing that deserves a special mention is that girls are now gaining access to primary education (taught between the ages of 6 and 15 years).

Earlier, adolescent girls were prevented from stepping out of their homes to reach an educational institute. They were never allowed to pursue higher education.

Their freedom to learn was compromised, restricting them to stay away from books and teachers.

A large chunk of adolescent girls are now breaking the barriers of gender bias and stepping out in pursuit of their aspirations to make it big for themselves and their families.

Research indicates that there have been a number of positive outcomes concerning the use of better teaching techniques for the girl child.

While teachers were meant to teach girls, they were also at the receiving end of lectures, practical drills, surveys, exercises and other activities that will make education a lot more interesting for girls.

Girls of modern times are brimming with curiosity. Their brains are rushing with thoughts that are constantly seeking answers coming from knowledgeable people.

So the tip here is for the adults/teachers to equip themselves with all the information that the girl child seeks. Elders are now being educated to take a strong step towards the achievement of gender equality in education.

With the rising incidents of young girls subjected to violence in schools, it was in 2014 that 35 organizations teamed up to establish the Global Working Group to End SRGBV. All in an attempt to stop the harassment of girls in schools, this initiative came up with a toolkit to keep a close watch on violence meted out to girls in schools.

Through this importance given to gender-based violence in schools, a new trend emerged paving the way for girls’ education that is secured from bullying, corporal punishment, sexual or verbal harassment or non-consensual touching of girls.

All these vices stood as strong barriers to girls’ education, which are now eliminated to a large extent, through legal punishments.

There are many girls which come from locales which are hard to reach.

Rural areas are the budding grounds for girls coming from poor families battling with social and financial problems.

Physical disability was another constraint marring the prospects of girl education. Such girls would naturally demand special education which could not be rendered on account of their non-reachability.

Added to this, these areas were prone to natural catastrophes.

All these socio-economic and geographic constraints posed a major challenge for global administrators. Since the year 2000, a considerable progress is being registered in the direction of widening the scope of education, bestowing the right for education to women.

By the year 2030, the United Nations Girls’ Education Initiative (UNGEI) has plans to come up with 17 UN Sustainable Development Goals (SDGs).

These goals will revolve around the eradication of poverty along with trying to nip off the instances of child marriages. Efforts will also be extended in the direction of enhancing the participation of women in political arenas.

Focusing on health education concerning women, UNICEF and Global Partnership for Education (GPE) have collaborated to establish the Global Fund to Fight AIDS, Tuberculosis and Malaria.

This is a major impediment to women’s education that is being countered by these global organizations.

A welcome move to bring in private-public sector partnerships has enabled business enterprises like Coca-Cola Company and Discovery Communications to support the cause of girls’ education.

With such renowned business communities joining hands, it became evident that girls’ education will get the much-needed boost as such initiatives will have a cascading effect on other sectors as well.

The United Nations Millennium Development Goals(MDGs) have consistently toiled to raise the global awareness towards the hindrances faced by girls in educating themselves.

However these MDGs faced the wrath of cultural allegations since boys were not only performing poorly in academics but they were also dropping out of schools.

Research now indicates that all the organizations which initially had their eyes fixed on girls’ education paved the way for better gender relations alongside creating room for teacher learnings.

All thanks to this positive trend, the submission of Global Education Monitoring Report Gender Review strengthened the move to focus on gender equality in education.

UNGEI teaming up with Global Partnership for Education (GPE) has strengthened the process of improving the scope of girls’ education.

This was a considerable move in the direction of building the abilities of the government along with the gamut of civil services.

This exclusive partnership is expected to work consistently to meet the GPE’s objectives so as to encourage other countries to step in and raise their voice for girls’ education.

Who but the well-known political bigwigs, youth ambassadors and public figures can create an awareness towards the importance of women’s education?

Along with the consistent efforts put in by these ambassadors of girls’ education, a special mention goes out to the intervention of social media which shows up in the form of informative and thought-provoking blogs, tweets, images, videos and surveys.

Speaking of women education and not talking about Malala Yousafzai would be offensive to the eminence of education itself.

The world knows Malala as a messiah for girls around the globe, who rose from near death experience at the hands of terrorists of Swat valley in Pakistan.

Not to mention the most elegant merger of the year happened between this luminary who sparked the fire of girl-education raging hot with her influence at UNICEF and the CEO of the most innovative tech giant in the world – Tim Cook.

The two bold visionaries plan on educating 100,000 girls under the alliance and this they say is just the start.

Seems like there world is realigning itself to eliminate the blocks in the alley of women empowerment.

All set to unleash the full potential of womenfolk, these educational trends linked to girls’ education are expected to build gender responsive educational systems.

If these trends continue to make their strong presence felt, it will not take long for you to identify the blind spots linked to women’s access to education but also be in a strong position to attain all the SDGs proposed by the UN.

All these results are expected to materialize by the time you step into the year 2030.