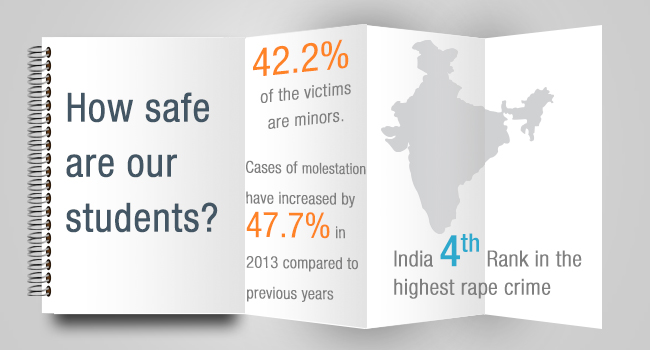 Childhood is the most innocent phase of life. What they learn and experience during the phase influences their development as an individual. But what if they are robbed of their innocence at such a tender age? That may be the biggest crime ever committed. Unfortunately, a large number of children around the world are subjected to molestation on a daily basis that can lead to mental and physical trauma, the burden of which the children will have to carry for the rest of their lives.

Some facts and figures

India ranks 4th in the list of countries with highest rape crime rates and about 42.2% of the victims are minors. News related to student molestation isn't anything new and most of us choose to ignore it until it happens to someone we know.

One of the latest cases of student molestation is the abuse of a LKG student by her seniors in a school in Kerala. Even after the case was reported, the school authorities did not take any immediate action against the senior students.

This event itself proves how schools, the place which is supposed to provide knowledge and security to students, are not safe anymore. Circumstances have changed and now, almost every parent has that fear in mind until their child, especially if it is a girl child, comes back from school.

These statistics have been taken considering only those cases which have been reported. If we consider those unreported case as well, the numbers will definitely rise. It is a fact that in India, 1 out 2 children under the age of 10 faces sexual abuse. But, in most cases, the authorities choose to remain silent. In fact, only a few schools report abuse, an even lower number takes immediate action and only a marginal percent has student counsellors.

There are a whole lot of things that can be done to prevent child sexual abuse and to help children out of the trauma in case they have been subjected to sexual abuse:

b) Educate children about their bodies and what parts of their bodies, others should not touch

d) Make a plan involving the students and thereby making them aware of where to go, what to do and how to react in case of an attempt of sexual abuse

Students are the responsibility of the school right from the time they leave from home to school until they are back to their homes in the evening. Therefore, it is important for schools to come forward and take strict actions to ensure safety of students for they are the future of our country.