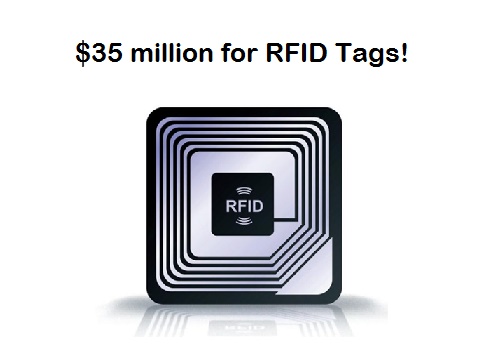 To expand production of its radio frequency identification (RFID) tags and readers which facilitate the Internet of things, a $35 million has been raised by Alien Technology in a new round of funding.

Tags based on RFID (radio frequency identification) acts as a super bar code and it’s easy for RFID readers to wirelessly detect and track RFID-tagged products in the supply chain. Alien’s RFID tags need no batteries.

Alien Technology has previously raised money to manufacture its own chips using an assembly system called “fluidic self-assembly”, where the system was developed by Alien’s founder John Smith, a professor at the University of California, Berkeley. Alien established many of the industry’s standards as RFID infrastructure took shape in the supply chain and attempted to go public. Even though the company sought to raise $120 million in 2006 due to the changing market conditions, it was forced to withdraw its initial public offerings.

According to Chris Chang, the new CEO, the older technology never reached heights that justified the huge manufacturing facility of Alien in Morgan Hill, California which is in the far south of Silicon Valley. The technology being expensive, Alien shut that down and decided to manufacture products in a traditional manner.

As compared to 230 employees in 2010, Alien has less than 100 employees now. Chang said that due to the attractiveness of the ‘Internet of things’, the company is going through a revival stage as actual orders for RFID readers and tags materialize.

The funding for Alien Technology comes from a new firm named Ruizhang Investment Co. which has many investors in China. This company is determined in deploying RFID for socially responsible purposes. Therefore with its support, a company such as Alien can bring more innovations to the volume RFID market.

This move reinstates the growing importance of RFID tracking systems technology. The numerous RFID applications across a number of industries are proof of the technology’s relevance. In the education sector, RFID vehicle tracking systems are quite popular. RFID tags are used for library management, store management, attendance management and a lot more.