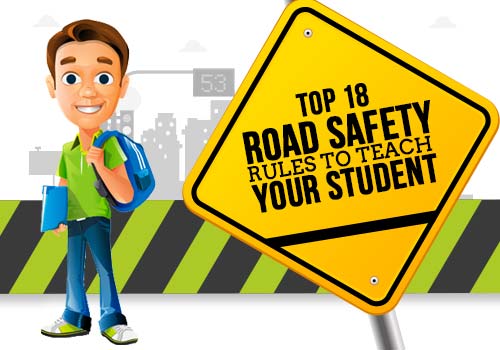 Statistics show that many hundreds of kids are being injured every day due to road accidents. Being unaware of the road safety rules, inexperience and carelessness are the main reasons behind the situation.

Just like parents at home, teachers should take the role at school to teach students about road safety and best practices.

However, make sure that you pass on only relevant information which they can handle on their own.

Here let us have a look at some of the most important road safety rules to be taught to your kids to assure their safety on roads. 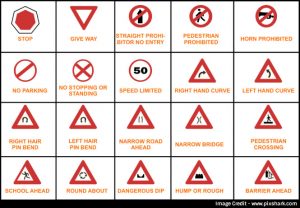 The first and foremost element to road safety for anyone is to know the signals.

Parents and teachers should make sure that they are aware of all the basic signals on road safety before leaving them alone.

Let us have a look at the main traffic lights and signals which your kids should know:

>>When the signal is Green, it means ‘go’ and now the vehicles are permitted to move ahead

>>If the signal is Red, it is a warning signal to stop the vehicle

>>When the signal is Yellow, you are supposed to slow down as it turns red soon.

>>Similarly, the walking man signal should be Green to cross the road at intersections and never attempt to cross if it is Red.

2. Be Careful While Crossing Road 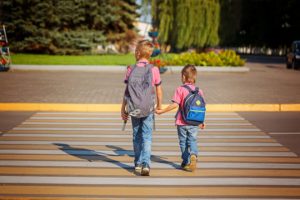 In the absence of a pedestrian crossing, give them the tips to cross the road safely by following these rules:

>>If any vehicles are approaching, wait for them to pass before you cross the road.

>>Insist them to never cross between the stationary vehicles 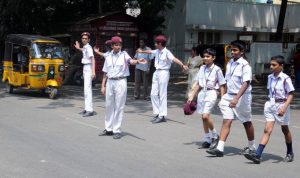 Teach them the importance of staying alert and attentive while moving through roads.

Also, teach them the sound of ambulances and that they should give them way first. Discuss with them on how to differentiate the loud sounds and faint sounds of vehicles to identify if they are near or far. 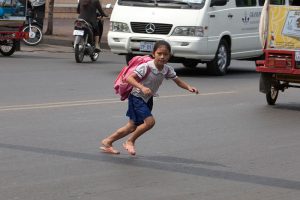 It is quite common for children to always run on the home and school premises rather than walking.

Advise them on how to behave while going through roads and ask them never to run but walk slowly.

This is even applicable not only on main roads but on the neighborhood roads near home or school.

It is not a new scenario when kids leave the hands of their parents or guardians and run on roads which might cause accidents.

Make them aware of such situations and teach them the importance of staying safe and patient while on roads. 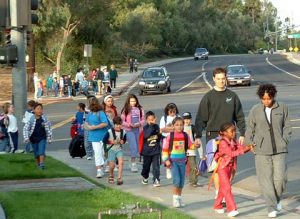 Advise them to always make use of the sidewalks when walking on the road. Even when the road is empty or busy, ask them to stick to the basic rules and use the side pathways.

Encourage them to talk to you about what all they see in the road or what they experience so that you can guide them on what is right and not.

6. Make Sure They are seen at Nights 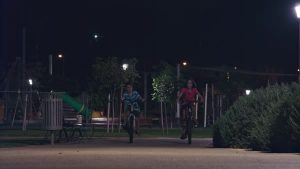 It is very common for children to play with friends in the neighborhood and come home late in the evening alone.

There will be sub roads in between where small vehicles pass by and so ensuring their safety is important.

Teach them the danger that comes with wearing dark colored clothing which might act as a camouflage them with the surroundings and make it hard for the vehicles to notice. 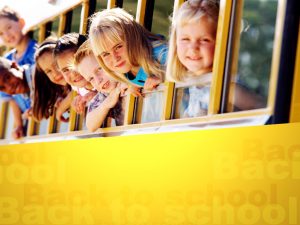 Teach them to follow the road safety rules when they are in the moving vehicles. Whether they travel by school bus or car, ask them to never put their hands or heads outside through the window.

Children often engage in the fun of waving hands to their friends through the window which can turn dangerous if the vehicles coming from opposite direction accidentally hits them.

>>Insist them to always wear a seat belt when they travel by car or similar vehicles.

>>It is good to hold the hard rail on the sides to avoid falls during sudden breaks. 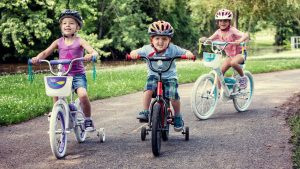 It is quite common for kids to ride by bicycle to school or neighborhoods. Parents and teachers should make sure that they keep up the road safety rules when riding bicycles and here are a few main things to consider:

>>It is always advisable to wear helmets while riding the bicycle

>>Parents should see to it that the bicycle is in proper working condition and check for breaks and light when using after evening.

>>Kids should keep their eyes and ears open to know if there are any speeding vehicles behind them and ride safely.

>>Ring the bell whenever you want to indicate any person or vehicle which causes obstruction on your way.

>>Use the bicycle lights whenever there is poor visibility and strictly during night travels.

9. Being Safe When getting in and out of Vehicles 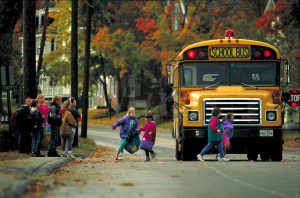 Teach them to be punctual to avoid running behind moving bus and jumping on it after they start moving.

When alighting or boarding the bus, it is always advisable to stand in the queue and take your turn.

Always prefer to get off the curbside while moving out of vehicles to avoid causing obstruction to other vehicles.

10. Never Multitask While Walking on Roads 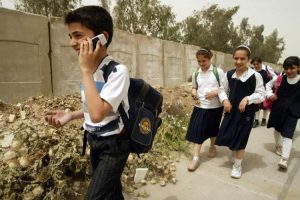 Insist the kids to never multitask while they walk through roads or ride bicycles.

Being alert on the road can save many unwanted accidents which cause just because of carelessness.

Staying alert is the key to safety and so kids should be completely focussed on what is happening in the road.

>>It is never advisable to text messages on mobiles or makes calls while on the road which cause them to miss any horns or warning signals. As they get distracted, it is possible that they may violate the road safety rules. 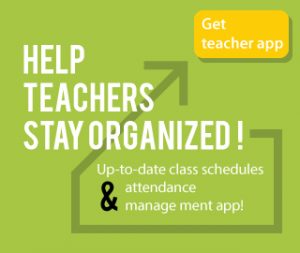 >>Some students have the habit of reading books or blogs on mobiles while they walk which needs to be strictly avoided while they are on roads.

>>Convey the importance of staying alert and road safety rules even while they play with balls or moving objects or with pets in neighbourhoods. Ask them to always have a look at the apartment parking and garages from where vehicles can come in.

Instead of just taking lectures on road safety rules, it is always a wise idea to teach them through games and road safety activities.

Using activity sheets, guessing games or crosswords, painting traffic signs as well as getting their responses for different scenarios on road can help them learn fast.

11. Teach them to use the pedestrian crossing

Pedestrian crossings are safe crossways made for pedestrians to cross with no hurry. They could be of various types including zebra stripes, pelican, Pegasus, Toucan and so on.

It is common parent instinct that parents tend to scoot over to crossroads along with their child.

They tend to follow the same process. So make it a practice to be calm on the roads and make it a point to use the pedestrian crossings only.

12. Controlled Enthusiasm while on roads

Few children tend to get excited when they see a family member or a friend no matter where they are. They will need to be taught the importance of staying calm and composed

13. Getting down the vehicle

Blind spotting can also occur while kids are getting off the car may be at school or somewhere else.  If they are not attentive enough, it might cause accidents of various intensities.

It is important that if the car is parked at the roadside, they look both sides before opening the door to check for an approaching vehicle to avoid any misfortune.

It is advisable to drop off the kids at the side of pedestal walk away or places with minimum traffic.

An unintentional start of a vehicle as a result of the fidgety behaviour of a child is not an uncommon story.

Playing around with car keys is also very risky as children could lock themselves up in the car. Such mischief could take very serious turns, causing incidents of suffocation or even a heat stroke due to heating up.

15. Safety while in Neighborhood

Parents often tend to let their guard down in the neighbourhood, thinking there is no traffic. There are parking spaces and garages around which cause occasional vehicles to pass by.

And then we have kids playing around chasing each other wildly. Not being alert in here can invite unnecessary trouble. Teach them to be aware even when they are playing around in the neighbourhood.

17. The direction of the traffic

This is a very important rule often ignored by most people.  It becomes easier for kids to judge potential threats in traffic when they find the direction of the approaching traffic.

Once they notice a threat it is easier to move away from it well in advance.

In a few countries like India, roads are intercepted by railway tracks. No doubt there is utmost security placed at railway crossings but it is important that kids understand the seriousness of the matter.

A passenger train takes almost a length of two football fields to stop. So it is advisable to not play around any railway tracks if there exist any in the neighbourhood.

Even while crossing such tracks if is of high importance that we co-operate with the crossing security and not try to rush in for any reason.

Previous 22 Smart College Eating Hacks That are Cheap, Healthy and Tasty
Next Is Career in Arts Still Worth Pursuing?