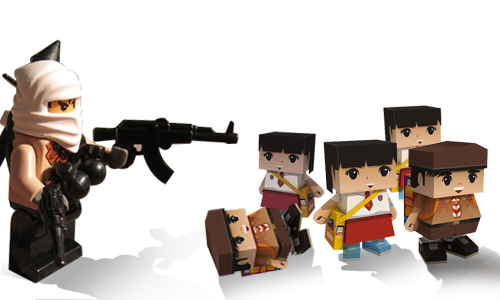 The news would have horrified parents across the world. It scared the hell out of me too. I wondered, ‘what if this happened at my child’s school? The same sentiments would have run through the minds of millions of parents across the country. Does his school have the means to tackle similar incidents? I did a bit of research and my findings were surprising. Every parent should know about it.

Schools are unlikely places for terror attacks but they remain vulnerable nevertheless. Why?

Be it our schools or our police force, they are simply not accustomed to such acts. The police are used to dealing with criminal activities, while terror attacks are of larger scale, and should be considered acts of war.

School personnel too don’t want to tackle active shootings. They are trained to nurture the nation’s future rather than dealing with such issues. Therefore they are hardly prepared mentally and physically to face such issues.

Attack on our Morale

We consider children to be divine or sacred. An attack on children would be considered a blow to the nation’s psyche. Terrorists would expect it to boost their own morale while shattering ours. They would think it gives them a psychological edge.

The Ministry of Home Affairs (MHA), India has already speculated that large scale terrorist attacks on places such as malls, schools, hostels, etc is a huge possibility. Main reasons as cited by the MHA is the wide spread social media reach and public attention such an attack might gather, and the minimum protection these places have. It serves as further reason to tighten security measures especially at schools.

A Welcome move by CBSE

On April 5, CBSE had sent a circular, which stressed on the importance of having a standard operating procedure (SOP) in case terrorist attacks happen. This circular dealt exclusively with terror attacks. Included with the circular was an SOP created by MHA to act as a guideline for schools to tackle terror attacks. The board has asked all school principals to read the SOP notice carefully and inform the teachers and students of the same. The schools have also been asked to prepare guidelines to deal with a terror attack and to assign tasks to different personnel to act in case an attack happens.

The Peshawar school attack was a horrible incident and no country can afford to let the tragedy to repeat. The police force in Goa and Hyderabad are hence taking security measures to provide safety to school goers. The Goa police plans to hold talks with school managements to work out drills in case of emergency and also, to increase the security around school campuses. The drive is a part of the initiative by Ministry of Home Affairs to keep schools safe from any kind of terror attacks. Meanwhile, the Hyderabad Police plans to set up guidelines to ensure the safety and security of the students. They plan to join hands with the Education Department to come up with the guidelines.

Students of today make good citizens of tomorrow. Therefore, it is important to impart education to them while providing them with safety and security. In the wake of the Peshawar school massacre, it is important for the schools to take drastic steps in ensuring the safety of students.

Previous Literacy in India [Infographics]
Next Why we love School Workforce Management software (And you should, too!)?