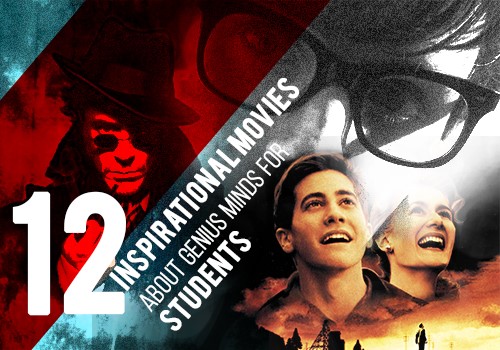 The amazing minds some people are either blessed with or those that shape up due to coping with physical and emotional struggles transform them into geniuses. It can also be a madness with which they face life so as to achieve their goals. Notwithstanding the fact that they may come from different backgrounds, a genius can be an inspiration to everyone who comes to know of his/her life’s story. In an attempt to portray the uniqueness of such minds,

here is a list of a dozen celebrated movies revolving around geniuses.

Released in 2001, ‘A Beautiful Mind’ is a biographical drama revolving around the real-life instances of the Nobel Prize laureate John Nash. Captivating scenes depicting his expert knowledge in mathematics as a child prodigy are worth watching. On the flipside, the hero has his share of struggles – schizophrenia. Despite his mental condition, John Nash becomes a teacher at MIT and gets married to his lady-love. However, life takes a serious turn when his marriage turns sour..

‘The Theory of Everything’ is a 2014 Hollywood drama inspired by the life story of the brilliant physicist of all times, Stephen Hawking. This movie showcases the love between him and his college mate Jane Wilde. The story takes a turn when, at the age of 21, the he is diagnosed with a motor neuron complication. How he battles the condition while professing the power of a mind is what really gets you

‘Limitless’, true to its name is a 2011 American science fiction thriller. The hero who plays the role of an aspiring writer is administered an experimental drug; a tablet that allows him to use his mind to its fullest potential. Dissatisfied with a single dose, he asks for more such ‘magical’ pills from his brother-in-law. During a fateful visit to his brother-in-law’s house, he becomes a part of an unexpected event. A series of twists and turns make this movie a sure-shot entertainer.

Being a self-taught genius has a flipside to it. This is exactly the sum and substance of ‘Good Will Hunting’, a 1997 Hollywood flick. The story follows the life of a man whose IQ attracts the attention of a college professor.  How the professor moulds this raw talent is the plot. .

‘Sherlock Holmes’ is a 2009 American-British action and mystery film, based on the central character of the same name coined by Sir Arthur Conan Doyle. Sherlock Holmes, the genius detective along with his doctor friend John Watson take up and solve a number of murder mysteries. The movie, with a number of unpredictable events truly makes up to the list of ‘must watch’ flicks about investigators of crime.

‘August Rush’ is a 2007 drama revolving around an 11-year-old musical wonder-kid Evan Taylor who runs away from an orphanage to reach New York City. Blessed with an ability to hear music everywhere, his curiosity to know about his true identity fuels his intent to plan this adventurous trip. This journey of self-realization is sure to enthrall the lovers of music.

True to the belief that sky is the limit for a dedicated person, ‘October Sky’ is a 1999 American biopic. Inspired by the true story ofHomerH. Hickam Jr., the son of a coal miner, the movie mirrors the power of dedication. Homer demonstrates a strong liking towards space and the launch of Sputnik 1 satellite that happened in 1957. What happens next is for the audience to watch and appreciate.

‘The Time Machine’ is a 2002 American science-fiction movie that will keep the audience on the edge of their seats. Dr. Alexander Hartdegen is a genius at the Columbia University. He builds a time machine; a machine that will allow him to travel back and forth in time.  Packed with a romantic backdrop, this suspense movie presents a number of interesting and intelligent characters linked to the past and future civilizations.

Tagged as one of the hit films of 1995, ‘Powder’ is an American fantasy portraying Jeremy “Powder” Reed who possesses an unmatched intellect wrapped in the blanket of telepathy and supernatural powers. With an innate ability to read the thoughts of people, he also holds a strong electromagnetic power inside him. How his telepathy along with the strange electromagnetic power dictate the events in his life becomes the crux of this must-watch movie about a genius mind.

. Recognized as an American psychological thriller that hit the screens in 1998, ‘Pi’ attempts to establish a correlation between mathematics and the universe. How  Max Cohen who believes that everything in the environment can be linked to numbers encounters very strange incidents makes up for its captivating theme.

Positioned in the genre of American romantic fantasy, Phenomenon is a 1996 film that will really make you think about what makes a simple yet average auto mechanic transform into a genius. A strange celestial phenomenon knocks him down only for him to realize that he is now blessed with unique intelligence. Aptly named ‘Phenomenon’, this movie which traces the attempts made by the protagonist to employ his acquired intelligence makes up an interesting watch.

‘The Social Network’ is an American biographical flick that traces the story behind the evolution of Facebook, the most-popular social networking platform. Released in 2010, this movie mirrors the life story of Mark Zuckerberg. Showcasing a series of events that happen in his life and the twists and turns Facebook encounters, this movie also highlights the legal hassles faced by the founder and the platform.

These dozen Hollywood movies are sure to captivate the audience about the unique intellect possessed by the protagonists. They also harp on the belief that a stroke of genius can change the course of one’s life to success or doom. It is all about the good you can derive out of your special blessings for you to enjoy a successful life that emerged out of a specially-wired brain.