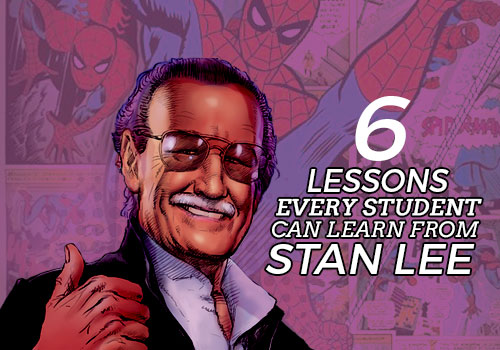 An era of Marvel Comics has ended with Stan Lee.

Stan Lee, the genius, who created a whole new universe of superheroes with his sheer creativity has passed away at 95.

He was the soul of MARVEL universe and every superhero character in it.

Captain America, Iron Man, Black Panther, Spider-Man, and thousands of characters cast out of his mind and changed the lives of millions.

Stan Lee taught us all how life can present similar problems to everyone, no matter how cool your powers are.

For his creativity and a deep sense of life, it would not be wrong to say that Stan Lee was the first superhero in the Marvel Universe.

If you observe the life of Stan Lee and his characters, you will find incredible lessons to take away.

Dedicated to Stan Lee, this article will offer lessons to learn for every student out there.

All the characters and the stories from Stan Lee came after a long time of practice and effort.

He created the majority of his work during 20 years of the time period, which came after he invested years and years in the industry.

In fact, there was a point when he decided to leave the industry.

He wanted to create certain kind of characters but was not getting the desired support.

His goal was to make every superhero believable.

He wanted every superhero to behave and act in a situation, exactly as if they are a common person.

Students today think about getting ahead in their life with the speed of lightning.

But success comes with practice and persistence. Sometimes you are not skilled enough, while other times, you don’t get the right opportunities.

This has happened to every successful person and this will happen to you as well.

You can only focus on building expertise and play the long game to accomplishment. That’s how you win!

Stan Lee always focused on doing what satisfied him.

And like any other creative person, he evolved his craft and felt the need to change his place in the world.

For at least a decade during the 1950s, Stan Lee spent his time writing stories in various genres such as humor, romance, fiction, horror, suspense, and others.

But he gradually became dissatisfied with the kind of work he was doing.

So, before the decade ended, Lee decided to switch his career.

It was then when the revolution of Marvel happened with rise of The Fantastic Four.

Every student struggles to choose between his/her choice of career and the career path showed by the parents and teachers.

Lee’s life teaches how inner-calling is key to attaining success.

This is one of the most popular quotes from the Marvel Universe.

Peter Parker, after getting his powers of Spiderman, receives this lesson from his Uncle Ben.

Remembering this quote can help you as a student and as a person as well.

Even if we don’t realize, we are all hungry for power.

Becoming the president of the college, leading the next debate team, representing your college in sports and many other powerful positions we aspire drives us forward each day.

But you should never forget that those powers come with responsibilities.

This quote from Stan Lee’s character will always help you understand that every power you are blessed with comes with a responsibility to use it to make the world a better place and never misuse it.

4. X-Men: Your Uniqueness can scare Other people

Stan Lee’s X-Men have been a powerful support for every person who faces any kind of discrimination. Using mutants as a metaphor,

Stan Lee explained the discriminations of cast, race, gender etc that prevail in our society.

X-Men are people with unique abilities, but the human world in the X-Men universe fears them all.

Students also face such discriminations from time to time.

Schools and colleges are large social environments where students can judge each other for something they don’t understand.

With X-Men, Stan Lee has taught that you just don’t need to worry about the people who judge you.

Focus on people who admire you for your unique abilities.

5. Captain America: Never Give Up

The character Steve Rogers was a soldier even before he became Captain America owing to an experiment.

Steve Rogers was skinny and 5’4 but never gave up.

If you read the comics or see the movie Captain America: The First Avenger, Steve becomes a symbol of determination.

He has a heart of gold and does the right thing with persistence.

That’s what students can learn and define their success in education and life.

6. Thor: You Don’t Deserve anything until you earn it

Thor is a son of God Odin.

He has all the privileges, but that makes him a little overconfident.

So, his father decides to teach him a lesson. He strips all the godly powers of Thor and banishes him from Asgard to Earth.

After which, he has to find his inner-self, become humble about the life he has.

Only then, he earns his powers back along with his famous Hammer.

Students complain a lot of time about what they deserve. But they don’t understand that deserving something requires earning it first.

For example, just because you spend your whole day studying for a test, you don’t deserve top scores.

For that, you actually have to perform during the test and earn those scores.

Stan Lee has surely done a favor to humankind by bringing to life such unworldly yet relatable characters through his comics.

Of course, he was following his passion, but in the process, he changed millions of lives.

Now that Stan Lee is not among us anymore, we should all remember him as the first superhero who taught how to live a great life!